Wyre Lodge (not the) Last Night of the Proms

Over 100 masons, partners and friends braved the Saturday night wind and rain to attend the Wyre Lodge No 7704 annual event at the Imperial Hotel in Blackpool. The theme for the evening being a parody of ‘The Last Night of the Proms’ 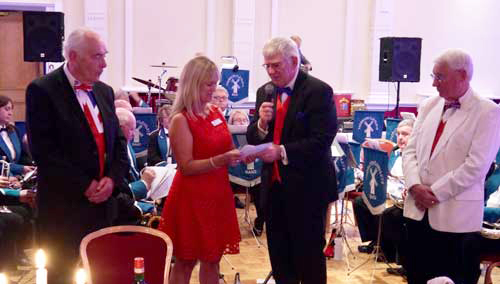 The Imperial Hotel is famous for distinguished and famous visitors visiting the hotel over the years. From Charles Dickens in 1869 to members of the Royal Family including Princess Margaret and Princess Anne, the Beatles and politicians such as Winston Churchill, Margaret Thatcher, John Major, Tony Blair and David Cameron.

The Lancastrian Suite of the Imperial Hotel was filled with tables suitably adorned with decorations of red white and blue and the director of ceremonies Bob Hopwood resplendent in Union Jack waistcoat and the WM of Wyre Lodge Danny Whalley in a white tuxedo led the evening’s proceedings. Starting with the Thornton Cleveleys Brass Band entertaining the diners with well known songs whilst the meal was being served.

After a fine meal there was a change of pace as comedian and musician Buzz Hawkins entertained the guests with his northern humour and songs.

True to the saying; “There is no such thing as a free lunch”, Tony was called upon to earn his supper and present a cheque for £1,000 to Michelle Lonnican, Corporate and Community Fund Raising Team Leader for Trinity Hospice and Brian House.

Michelle responded by thanking the members of Wyre Lodge for their most generous donation that will be a great help in the continuing program of providing the best possible palliative care for adults and children. Freemasons on the Fylde have supported the work of Trinity Hospice over many years and their donations are greatly appreciated.

Thornton Cleveleys Brass Band returned to accompany Claire Platt, the daughter of Wyre Lodge member David Platt. Claire is a classically trained opera singer who gave a resounding rendition of Jerusalem and Land of Hope and Glory assisted by the assembled multitude of brethren and guests. Vocal cords being liberally lubricated by copious amounts of wine by this time!