North Fylde Group Publicity Officer, Peter Dunn, found that he was the subject of the story himself when he was installed as master of Hesketh Lodge No 950. 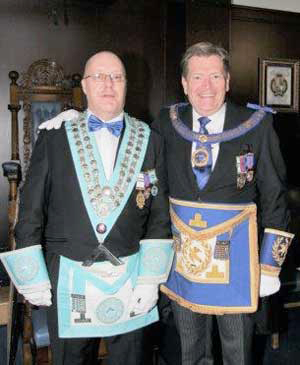 APrGM Kevin Poynton was the principal guest of the lodge and he was accompanied by PAPrGM Harry Cox, North Fylde Group Chairman Peter Greathead and his predecessor Duncan Smith as well as other grand and acting Provincial grand officers.

Although there had been great preparations for the event at venerable Hesketh Lodge, which was first consecrated in 1863, developments overtook the lodge’s careful planning and the day before Peter’s installation lodge DC Les Ivison had to cancel his appearance as his mother had been taken seriously ill. It fell to the lodge secretary Tony Hind to volunteer to act as DC in the lodge room with his colleague Mike Lamerton volunteering to take on the DC’s role at festive board.

Tony Hind admitted the lodge’s distinguished guests and following their welcome and salutations which were interestingly done by the erstwhile DC the installation ceremony began in earnest. Mike Lamerton presented Peter as the master elect. Steve Heginbotham next took over as installing master, admirably performing the inner workings and installing Peter Dunn as the newest master of Hesketh Lodge.

The brethren in turn as the lodge moved onwards saluted their new WM. Busy Tony Hind presented the third degree working tools, Chris Nicholson presented the second degree tools and Ron Fenton those of the first degree. All of which was ably done by the three presenters and Bill Acton who resumed his place as installing master. Rodney Greenall presented the tools of an installed master word perfectly.

David Lomax then announced that the ceremony of installation was complete. David presented Kevin with cheques totalling £1,020. These were destined for various charities including the MCF 2021 Festival, Trinity Hospice and Fleetwood Masonic Hall. Kevin thanked the brethren of the lodge for their generosity.

The APrGM thanked the three installing masters on a job well done and on behalf of the PrGM wished the new master and the brethren well for the ensuing year. He also singled out the acting DC Tony Hind for making the afternoon and evening an interesting one.

Following the closure of the lodge the brethren retired to an excellent festive board. Mike Lamerton performed his duties as DC with aplomb and Kevin Poynton entertained the diners with a humorous speech. He thanked the grand officers for their company and said that they had had an enjoyable day. He spoke of the MCF 2021 Festival and said from the generous donation the lodge had made to it that there was no need to encourage efforts to support it. He mentioned the £1,000,000’s that Freemasons gave to charity as a result of the scheme.

He praised the efforts of the North Fylde Group officers who worked hard to ensure that the group was enjoying success. He also thanked the acting officers present who had given of their time to support both him and Hesketh Lodge by their attendance. Kevin said that the ceremony had been wonderful and congratulated all who had taken part in it and that the ‘300 DCs’ present had helped Tony Hind and everyone present to play their part well.

He brought his personal congratulations to Peter Dunn and told him to get out with the other masters to have an enjoyable year and wished the lodge success in the year ahead. He mentioned that his Provincial responsibilities were to do with communication and that Peter and his publicity colleagues had been responsible for raising awareness about Freemasonry with over 1,200 stories being published. He encouraged the brethren to talk to friends and family about them being Freemasons.

He spoke too about Fleetwood Masonic Hall for which Peter Dunn is hall secretary and asked brethren to promote the hall for all manner of occasions with the public. He also told a joke about hot meals and referred to his Liverpool extraction which was met with great delight. Kevin concluded by wishing everyone in Hesketh continued success.

As the evening progressed the master’s song was rendered by Roger Lloyd-Jones accompanied by pianist David Brown. A raffle raised a commendable £240. 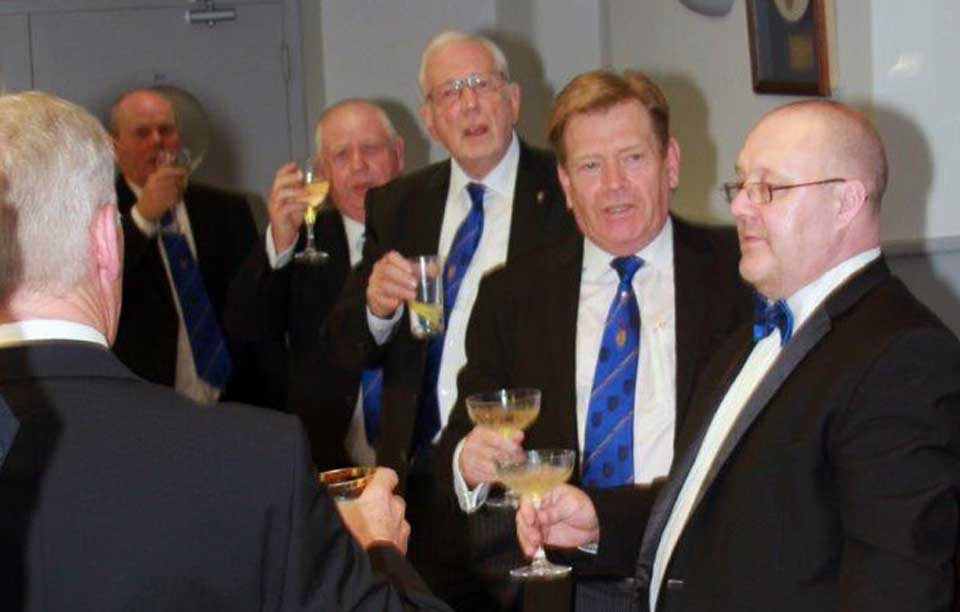 Pictured are the brethren toasting the new master.