The brethren of South Shore Lodge No 4672 and visitors were delighted to welcome as their principal guest David Edwards, Provincial Senior Grand Warden on his first visit as a representing officer since being invested in April 2019. 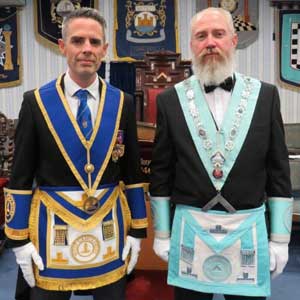 42 brethren gathered at Cleveleys Masonic Hall to witness Rob Bennett being installed by his predecessor Jim Dale. Jim opened the lodge and welcomed everyone to the lodge. He swiftly completed the administrative business of the lodge, and this complete, the lodge DC Tony Farrar, who has completed 12 years in the role, formally introduced the representative of the Provincial Grand Master, David Edwards to Jim.

Jim opened the lodge into the second degree and announced the start of the installation by asking Ian Jackson to occupy the chair of SW, Howard Gebhard to occupy the chair of JW and Roy Newstead to act as installing IG. The master elect was presented with sincerity by Wayne Hadlow and once master Masons had left the lodge Jim Dale expertly delivered the inner workings and installed the new WM Rob Bennett.

The third degree working tools were delivered by Wayne Hadlow; Howard Gebhard presented those of the second degree and Roy Newstead those of first degree. There was no doubt that the highlight of the ceremony came when Tom Bullen delivered the address to the WM to perfection. Norman Pennington gave the address to the wardens and the secretary of the lodge Howard Emmett addressed the deacons leaving the final address, that to the brethren of the lodge, to David Edwards. 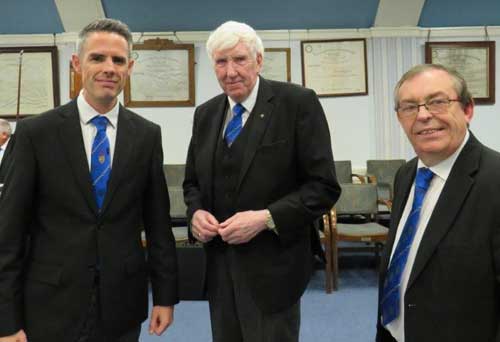 Pictured from left to right, are: David Edward, Glen Jackson and Mike Brown.

The ceremony completed, it was the cue for David to bring the greetings of the Provincial Grand Master Tony Harrison. David in turn congratulated the installing master Jim Dale, the brethren who had presented the working tools and the hard working DC Tony Farrar. Robert presented David with cheques for £500 to the West Drive Masonic Hall Building Fund, £50 to Dreams Come True and £250 to Blackpool Carers. David thanked Robert and the brethren on the lodge for their generosity.

At the festive board, David gave his first response to the Provincial grand officers’ toast, starting by congratulating the new master and those officers who had taken part in the ceremony. David thanked John Cross and the acting and group officers who had supported both the lodge and himself. David praised Toy Farrar saying: “He organised the chess pieces with his usual calm and efficiency.”

David continued by encouraging the members to support the MCF 2021 Festival, giving examples of the grants into research, into degenerative diseases and into helping to reduce loneliness in older people. David asked those who are not already in the Royal Arch to join the degree saying that it was the fourth step in Freemasonry and vital in brethren’s progression and knowledge.

David spoke passionately about membership to the brethren and encouraged them to be vocal about Freemasonry. He referred to his own lodge, Baines Lodge No 7844, when the brethren are at a lodge meeting, their wives, partners and families join together to socialise.