Thornton and Cleveleys Chapter No 3854 held its annual installation convocation at Cleveleys Masonic Hall. 43 Companions were in attendance to see Roger Lloyd-Jones swap his microphone for the first principal’s sceptre.

The chapter was honoured to have as its principal guest, Assistant to the Provincial Grand Principals Robert Duncan Smith. He was accompanied by the North Fylde Group Chairman Peter Greathead together with fellow grand officers, Jack Coates and Duncan Smith, supported by acting Provincial grand officers Bill Hembrow, Vincent Carte and Bernard Snape.

Roger Lloyd-Jones, well-known for his singing talents, not only in the North Fylde but across the Fylde coast, made his debut as first principal of Thornton and Cleveleys Chapter. Roger is a well-known supporter of the arts on the Fylde coast and is the Grand Theatre Trust Chairman. He is also an active member of the Thornton Cleveleys Operatic Society.

The three principals led by the current and installing principal Ron Fenton opened the convocation and smoothly completed the administrative business of the chapter.

The director of ceremonies Eric Peat presented each officer in turn, starting with Peter Dunn as third principal, Umesh Dholakia as second principal and Roger Lloyd-Jones as first principal and in what was a heartfelt and sincere ceremony they were installed into their respective chairs.

At the conclusion of the installation ceremony, Duncan brought the congratulations of the Grand Superintendent Tony Harrison, wishing the three principals well during their coming year in office. He congratulated all who had taken part in the ceremony.

After Duncan’s comments, Roger presented him with a cheque for £300 for the MCF 2021 Festival, £200 for the Mustard Seed Project and £100 for the Blackpool Carers Centre. Duncan thanked the chapter for their donations 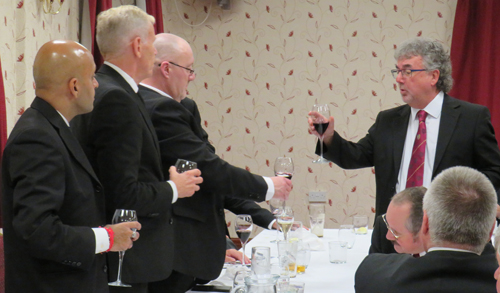 At the festive board Duncan started his response by thanking the grand officers for their support. Duncan continued by saying that it was great to be at Thornton and Cleveleys Chapter and to see it in such good health.

Duncan congratulated Roger on attaining the first principal’s chair, wishing him a happy and healthy year. Duncan added that both he and Roger were both in the chair of their respective lodges at the same time, saying that he was delighted to be able to represent at his installation. Duncan made a point of congratulating everyone who had taken part in the ceremony, particularly praising the three companions who had presented the robe addresses.

Duncan continued by saying that this was his second year as Assistant to the Provincial Grand Principals and asked that the members of the chapter should promote the order whenever they got the chance, saying that currently about 43 per cent of the Craft members are in the Royal Arch.

Duncan finished his response by thanking the chapter for their donation to the MCF 2021 Festival and saying how nice it was to see so many members wearing their patron’s jewel. Duncan asked any member who had not subscribed to consider doing so, as the Province receives more back than is donated.

After a fabulous festive board, Roger (who is also the charity steward of the chapter) conducted a West Houghton raffle which raised a fantastic amount of £180. The evening was brought to a close by the janitor’s toast, rendered eloquently by John Liversidge.