We are informed that in this country Freemason’s lodges are usually held in the evening, but not in the case of Bispham with Norbreck Lodge No 4731, who after 94 years have decided to become a daylight lodge meeting at Cleveleys Masonic Hall. 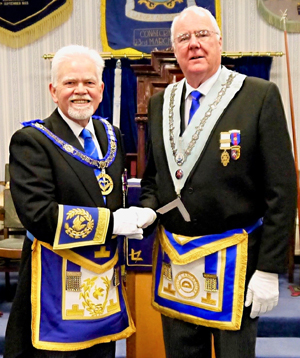 The decision was made after much discussion to provide for the brethren who no longer wished to venture out at night time or were unable to attend an evening lodge due to work or family commitments. Today is the lodge’s first installation meeting as a daylight lodge.

The WM Mark Spragg offered David the gavel of the lodge, who politely returned it, confident in the knowledge that it will remain in capable hands.

Brian Gregson presented the master elect John Whitley, following which John was installed into the chair of King Solomon in due course by the installing master Mark Spragg, with assistance from David Thomas as installing senior warden, Giles Berkley as installing junior warden and Frank Kennedy as installing inner guard.

The working tools were confidently given by Peter Gratrix, Derek Broadbent and Ashton Jarvis.

At the conclusion of the ceremony David rose and brought the greetings of the Provincial Grand Master Tony Harrison wishing the new master John Whitley good health to enjoy his year as worshipful master. 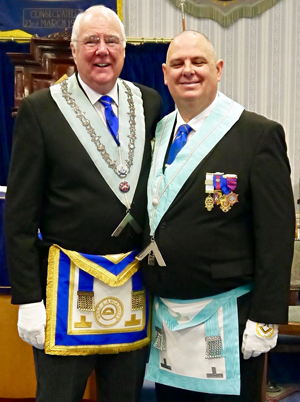 John presented David with cheques to the value of £2125; £1000 to the MCF 2021 Festival, for Freemasons, their dependents and the wider community, £800 to MADD – Make A Direct Difference – that provides anti-bullying information packs for schools, £150 to the WLFC to assist Freemasons in need within the Province of West Lancashire, £150 to Macmillan Cancer Support to provide nursing care for people suffering with cancer, £25 to the West Lancs Freemasons Bowling Society. David thanked the brethren of the lodge on behalf of the recipients for the donations adding that they should all be proud of their fund-raising efforts.

Following the meeting there was a festive board where 42 brethren enjoyed a magnificent lunchtime buffet instead of the traditional three course meal.

In his reply to the toast to the grand officers, David thanked the group chairman and the other grand officers for attending and for their continued support. It had been a delightful morning in this unique daylight lodge, the first in the North Fylde Group. The decision to change from an evening to a morning lodge was a brave and tough decision David said, but seems to have been successful, especially with two new joining members. On the same theme, David reiterated that a daytime lodge would appeal to some brethren and the best way to promote the lodge is word of mouth, so we must talk about how much we enjoy our Freemasonry.

On the subject of retention, we must ask why members leave, are there problems at home or at work, could they join another lodge perhaps? Only by asking will we know.

David informed the brethren that a good source of information for lodges and for members own knowledge is the Solomon website. It is also suitable for non-Masons who may wish to know a little more about Freemasonry before actually joining.

John Whitley thanked David for attending this morning and presented him with some flowers for Mrs Randerson and a bottle for himself. The festive board raffle raised a magnificent amount of £208 for good causes.

After the Tyler’s toast the brethren departed to enjoy the remainder of the day.