The brethren of Royal Oak Lodge No 5919 whose seed was firmly planted in 1944, proved that it is continuing to grow with strength, and has started its season with the first of three initiations. 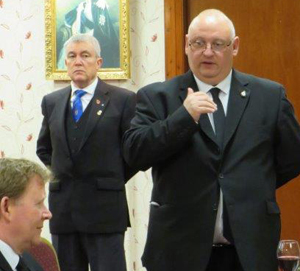 Pictured is Alan Reaper responding to the toast to his health.

The lodge was opened in the first degree by the Joe O’Brien, WM, who transacted the business of the lodge with ease, which included the ballot for the next candidate for initiation.

Joe then announced that the nest business was to initiate Mr Alan Reaper. Alan, who having been prepared for initiation by guest tyler Bob Major, entered the lodge and was expertly conducted around it by junior deacon Steve Hardman, with the support of the his proposer and senior deacon Martin Poole.

Joe O’Brien conducted the ceremony with confidence and great style under the ever watchful and supportive eye of the director of ceremonies Alex Tomlinson.

The first degree working tools delivered by Martin Poole and as is the ancient custom, Brother Alan then retired from the lodge. On his return the charge after initiation was delivered with surety by Ronnie Coles. The final act of the initiation was a formal welcome into Masonry by the master. The second person to shake Alan’s hand was the group mentor Glen Jackson who presented him with a welcome pack.

The business of the lodge being completed the brethren retired to the dining room for a much appreciated three course meal at festive board.

Martin Poole proposed the toast to his candidate and in his response Alan thanked everyone who had taken part in the ceremony, saying; “I look forward to playing an active part in the lodge.”