Barry Seddon returns to the chair of New Sanctuary lodge No 6604. Barry was first installed as master 39 years ago in 1980 and now in his 50tth year in Freemasonry, the lodge was proud to see him installed for the second time. 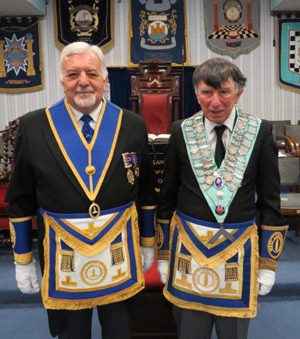 Members of the lodge were delighted to have as their principal guest Barry Dickinson PPrSGW representing the Provincial Grand Master Tony Harrison. On this occasion Barry was accompanied by the North Fylde Group Chairman Peter Greathead, together with Malcolm Worsley and acting Provincial grand officers Jim Finnegan and Terry Murtagh. There was also a strong contingent from Burton Court Lodge No 3864 as the two lodges have a close relationship since Burton Court lodge was moved from London to Cleveleys during the war years.

The lodge was opened and the regular business of the lodge was dispatched by the WM Ian Winnard with great skill as befitted a master who has just completed his second year in the chair.

After the opening of the lodge, the director of ceremonies who had previously retired from the lodge returned to announce Barry Dickinson and the supporting officers. Ian formally welcomed Barry to the installation and expressed the hope that he would enjoy the ensuing ceremony.

The third degrees tools were delivered by Howard Shaw of Thornton and Cleveleys Lodge No 3854, with the full version of second tools being presented by Delwyn Hernen and finally the first degree tools were delivered by Matt Panton of Burton Court Lodge. Barry Dickinson’s duty was then to give the final address to the brethren of the lodge.

As is tradition on the completion of the installation Barry rose to bring the congratulations of Tony Harrison to Barry Seddon. Barry in turn passed Tony’s thanks to Ian not only in preforming such an accomplished installation but for all his hard work during the two years of his mastership. 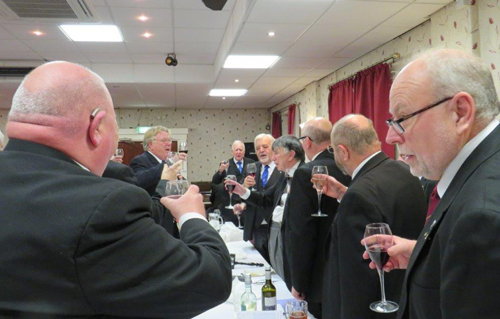 Barry Seddon then presented Barry Dickinson with cheques for £327 for the 2021 MCF Festival, £200 for the Multiple Sclerosis Society, £150 for the First Thornton Scouts, £100 for the Royal British Legion, £100 to The Kim Smith Fund (brain tumour charity), £150 for the Brian House Children’s Hospice, £125 for the Grand Theatre and £125 for the Park Club Building. Barry was quite bowled over with the generosity of the lodge and its visitors.

With the installation ceremony complete Barry Seddon then proceeded to close the lodge and the brethren then retired to the dining room to continue the festivities with good food and good company.

In his response to the toast to his health, Barry said that it was a delight to be at New Sanctuary Lodge. He thanked Peter Greathead and the group officers for the work that they do to ensure that the North Fylde Group is a shining example within the Province.

Barry Dickinson congratulated the new master Barry Seddon on returning to the chair in his 50th year in Masonry. He said that he hoped that a healthy and enjoyable year in office would follow.

Continuing, Barry said times were different when the lodge was consecrated. The plans to form a new lodge would have started during the Second World War and the years that followed saw a massive increase in membership and that 1,000s of young men who had been involved in the conflict for six long years, in very difficult circumstances. They had enjoyed the camaraderie and support in their brothers-in-arms and they had found the same support in their brothers in Masonic lodges.

Many new lodges were consecrated in the years after the war. 1,200 new lodges were formed, the move of the Ministry of Pensions to Cleveleys meant that the members of Burton Court Lodge needed to find a new Masonic home and with the help of Thornton and Cleveleys Lodge, New Sanctuary was formed. Barry completed his response by saying that they had a unique history and one that needed to carry on.

The master’s song was excellently rendered by Martin Lavansch of Burton Court Lodge. In an unusual end to the evening’s festivities the members of New Sanctuary Lodge serenaded the visitors.